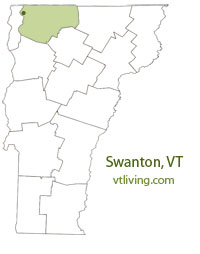 The town of Swanton is thought to be one of the earliest areas of Vermont to be inhabited by humans. Native americans lived in Swanton decades before the area was discovered by explorers. An important Abnaki village of Missisiasuk was located here on the Missisquoi River. The village’s name, meaning “people of the great grassy meadows”. The Abnaki name for the mouth of the river was Maskwenozakek, literally “the place where muskelunge abound”. (Muskelunge is a fresh water fish, also known as Pike.) Queen Elizabeth II sent a pair of Royal Swans to Swanton in honor of the bicentennial of the town’s granting. The source of the town name is most likely from William Swanton, a British naval officer who commanded a squadron at the time of the capture of Louisburg in 1760. the important Abenaki village of Missisiasuk was on the Missisquoi River. Swanton includes the villages of East Swanton and West Swanton.