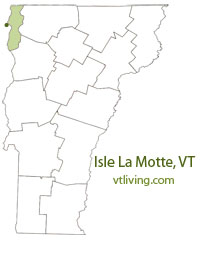 Isle La Motte, Vermont is an island on the western side of Lake Champlain. Isle La Motte has the Chazgan Coral Reef, the oldest fossil coral reef in the world. It originally was from south of the equator but migrated here with the movement of the continent. Other Isle La Motte, VT points of interest are Fort Saint Anne, the St. Anne Shrine and the Isle La Motte Monument, a statue of Samuel de Champlain, after which the lake is named. He is believed to have landed here in 1609.