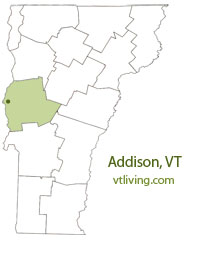 Addison, Vermont is a town in Addison County. Addison became one of the first settlements in Vermont in 1761. Located here is the D.A.R. State Park, John Strong D.A.R. Mansion, and both the Dead Creek and McCuen Slang Waterfowl areas. Addison is comprised of several villages: Addison Four Corners, Chimney Point (on the shore of Lake Champlain), and West Addison.