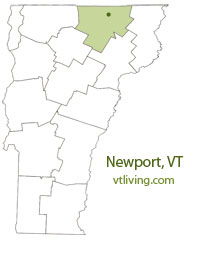 Newport, Vermont is a border town located on the southern end of beautiful Lake Memphremagog. Newport is the largest city in Orleans County. Recently, Newport’s downtown area has been beautified with the addition of a new State of Vermont office building, which also houses several businesses.

Newport is made up of Newport City, Newport Town, and Newport Center, and is a regional shopping mecca with numerous retail stores, restaurants, and nightclubs. The popular Eastside Restaurant attracts diners from both sides of the international border of the United States and Canada. The Newport Daily Express newspaper is published here, and the Newport State Airport is located here, as well. Lake Memphremagog is popular with fisherman and photographers – this deep, spring fed lake extends more than 30 miles into Quebec. Magog, Quebec sits on the northern end of the Lake. The mountains Jay Peak, Vermont and of Canada are clearly visible from the shores of Lake Memphremagog in Newport. Lake Memphremagog is also rumored to be inhabited by a large, amphibian creature dubbed “Memphre”. The serpent-like creature has been spotted on several occasions by both Canadians and Americans. Newport, Vermont was the birthplace of Charles Francis Adams, founder of the Boston Bruins – one of the original six teams of the National Hockey League. Adams founded the Bruins in 1924. The NHL’s Adams Division is named after him. 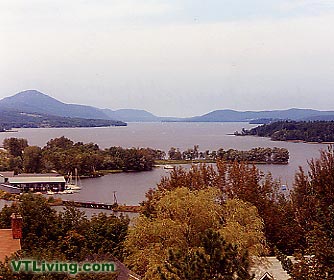