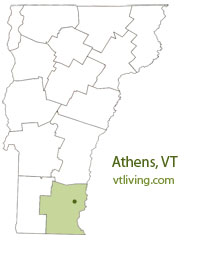 Athens, Vermont is a town in Windham County. First settlers arrived in mid winter when snow was four feet deep. Athens, Vermont was the site of an episode of Extreme Makeover Home Edition in 2007. A new house was built for the Vitale family. The program aired on ABC television originally on December 9, 2007.