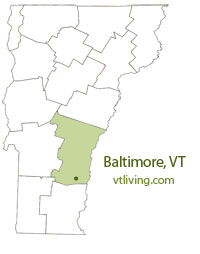 Baltimore, Vermont is a town in Windsor County. Baltimore was originally the southeast part of Cavendish, but because Hawk Mountain was in the way to travel to this part of Cavendish, a Legislative Act was made to allow Baltimore became its own town. Baltimore, VT derives its name from the Irish saying “Baile an Ti Mhoir”, which means “town of the big house”.