Vermont has more than its share of Mysteries and Legends – Champ, the serpent of Lake Champlain, the infamous Catamount Mountain Lion, and the focus of this article, which involves an international lake and a serpent named “Memphre”. The legend of “Memphre” dates back to the days of Vikings and Indians, long before White Man settled the regions now known as Northeastern Vermont (The Northeast Kingdom) and the Eastern Townships of Quebec. Ask us about Vermont Legends or share strange happenings. To feature your Vermont business, contact us. 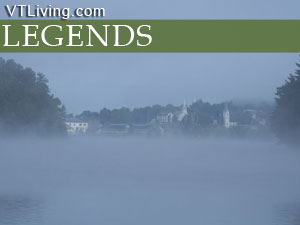 When the early settlers arrived to the area now known as Lake Memphremagog, the Native Americans told them that they would not bathe or swim in the lake because it was inhabited by a sea serpent. The serpent sightings continue even today with more than 200 documented sightings.

Most witnesses describe a long, black or dark green reptilian creature swimming near or on the surface of the water. In 1961 two fishermen saw a black creature about 40 feet (13 meters) long swimming, partially submerged, past their boat. In 1994 four persons in two separate boats reported a 30-foot long, black, three-humped creature. Sightings have been reported from Magog, Quebec, Canada and Newport, Vermont.

Newspapers on both sides of the international border (Quebec, Canada, and Newport, Vermont, USA) have been reporting the sightings for a number of years. January 21, 1847 Stanstead Journal reported: “I am not aware whether it is generally known that a strange animal something of a sea serpent….exists in lake Memphremagog…”.

Viewing the Lake Serpent of Memphremagog takes time, and luck. Choose a comfortable location from shore or slowly navigate the waters of Lake Memphremagog in a boat with a camera loaded and ready to capture the moment on film. Please contact Vermont Living if you photograph or view a glimpse of this elusive creature.

Lake Memphremagog is a 27 mile long, deep, finger-like lake that extends from Newport, Vermont, north to Magog, Quebec. Travelers will enjoy a visit to the lake. Several excellent restaurants are located on or near the shore of the lake in Newport and in the Canadian city of Magog. Magog offers sight-seeing boat rides, numerous shops, and boat rental facilities. Magog is about a 20-minute drive from the Northern Vermont town of Derby. A trip to Lake Memphremagog will reward you with superb photo opportunities, even if Memphre is not sighted!