Live theater is alive and well in Vermont. Flynn Theater, Dorset Playhouse, Weston Playhouse, and Saxton’s Playhouse are probably the most visited live theater venues in the state. There are also some outstanding community theatre productions. Share your suggestions and thank you for supporting the arts in Vermont. Ask us about the Flynn Theater or share comments and reviews. To feature your business, contact us.

Destined to be Burlington’s centerpiece of entertainment, the Flynn Theatre was built over seventy years ago by businessman John J. Flynn. With a stage made for quick and easy set changes, sloped floor seating, excellent acoustics, and a downtown location, the Flynn was designed for the live performances of Vaudeville. With the rise of the motion picture industry, the Flynn shifted and operated successfully as a movie theater for almost fifty years until its own decline as multiplex movie theaters began to rise and take hold in the 1970’s.

performance. The Lyric group went to the forefront of a gathering of attracted citizens who raised money to purchase and restore the Flynn. The Flynn then reopened in 1981 as The Flynn Theatre for the Performing Arts, and grew to furnish a managed home for the arts, and making the theater accessible to artists for special projects. Through the 1980’s and 1990’s, the Flynn has developed programs to aide teachers as well as students, and introduced the “On-Stage” series of performances that focus on Vermont state and regional artists.

In the late 1990’s and early 2000 the Flynn underwent successful capital campaigns that stabilized the theater, and helped finance the restoration and expansion which was completed in 2000. Restored to its original art deco interior, the Flynn Center now houses MainStage (the original Flynn Theatre), FlynnSpace (a smaller, intimate performing arts theater), educational and dance studios for year-round classes, a gallery visual arts gallery, and administrative offices.

The Flynn Center Main Stage theatre has a seating capacity of 1453, 1141 in orchestra seating and 312 in the balcony. Flynn Space can accommodate 110 to 220 plus people depending on the type of performance.

The Flynn Center with all of its facilities, programs, and activities are fully prepared for this season, call the Flynn Center for the Performing Arts for more information. 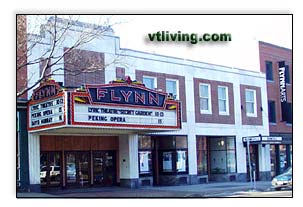