Vermont is known for its cows. The Randall Lineback is a breed of cattle that is unique to Vermont. There is a small but dedicated group of Vermonters and cow lovers dedicated to the future of Randall Linebacks – a breed of cattle unique to Vermont. This organization is currently trying to get the Randall Lineback designated as the official Vermont State Heritage Breed. Vermont cows produce some of the best tasting dairy products in the world – world famous Cabot Cheese and other dairy products. Ask us about VT Cows or share comments. To feature your VT business, contact us. 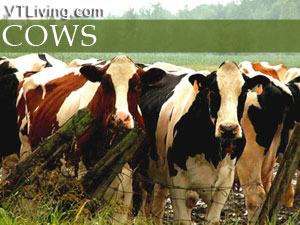 The Randall Lineback is a rare breed of cow that is defined by the distinctive lineback color pattern. The Randall family of Sunderland, Vermont developed their herd for dairy and farm work but they have become a multi-purpose breed. Unfortunately, they are listed as “critically rare” by the American Livestock Breeds Conservancy. This distinctive breed has developed their own instincts and traits. Randalls forage well on pasture, are naturally resistant to parasites and possess remarkable survival instincts.

The Randall Lineback breed of cattle originated in New England – a mix of European breeds that were brought to Vermont and neighboring states in the 18th and 19th centuries. The breed is named after the Randall family of Sunderland, which is located in southwestern Vermont.

In the mid-1980s the breed faced an uncertain future when Everett Randall passed. Fortunately, some small groups, of Randalls were sold to individuals who were interested in preserving the breed which has been brought back from near extinction to around 150 animals.

Randall Linebacks are still listed as critically rare by the ALBC (American Livestock Breeds Conservancy. For more information or to get involved in helping to preserve this piece of Vermont history contact the SVF Foundation, 51 Beacon Hill Road, Newport, RI 02840 or call 1-401-848-7229.

Annabell the Cow with Glasses

Cow by the School Bus

Cowgirl and her Cow

Cows in the field

Cow in the pasture

Cows smiles to you.