Ahhh… Mud Season in Vermont. Mud Season is yet another visitor season that often arrives without notice and varies in its intensity. Mud Season is a great time to take an off-season Vermont vacation. Mud Season does not effect most Vermont visitors – but if you are renting a home on a back road, dirt road, or gravel road do be advised that travel can be difficult during Mud Season. Mud Season is the time of year when the simple task of making it home after a day at work becomes a challenge. There was a time when I laughed at the sight of those jacked-up, four-wheel-drive trucks with tires bigger than my car. I stopped laughing and watched in awe last mud season when the only vehicle that was able to navigate my road was an old 4×4 with really BIG tires. Nearly everyone who has lived through a Vermont Mud Season on a dirt road has a story to share. Thank you for visiting Vermont Living. Ask us about Vermont Mud Season, share muddy comments, or feature your Vermont business, contact us. Vermont Living Magazine is made in Vermont. 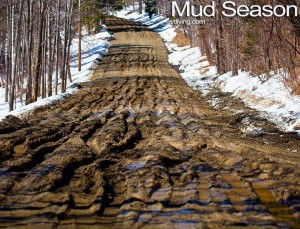 It gets really exciting around here in early Spring. Some folks are afraid to leave the house for fear the road will have melted and turned to ‘mush’ in their absence. For some ‘New England daredevils,’ Mud Season is a competitive sport that holds as much weight as hockey or football!  My neighbor has a 4×4 and can’t wait for the road to get soft and become impassable for the average vehicle. He is quite proud that his old 4×4 rolls right over the two- foot ruts and sink-holes that swallow the average traveler. He enjoys slinging mud in every direction from his BIG tires. He dares to go where others fear to tread… literally!

Some years my road gets so bad even the four-wheel-drive tow trucks won’t come up here. I found that out a couple of years back when returning from a long ride late at night. The road was fine when I left earlier in the day. But a sudden warming turned the once gravel surface into two-and-a-half feet of muck. The car sunk to the bumper before my weary eyes could perceive what was happening.

A call to the tow truck operator yielded a curt response, “we’re not going up that road, we’ve already been stuck up there this week!” Several more attempts with other tow truck operators resulted in similar responses. It was the operator that broke out laughing that made me realize I was on a path to nowhere. The vehicle sat in the middle of the road, while I walked through the mud and darkness with two scared and crying children to my home in the country.

Every Spring it’s a little different. Some years we suffer very little, others we struggle to keep our sanity. Some say the severity of Mud Season depends on how deep the frost permeates the ground in winter. Others claim it’s related to the amount of rain we receive in the early Spring. While still others believe it results directly from the amount of snow left on the ground when the Spring thaw begins. Personally, I think it depends on how quickly the sub-surface defrosts…

One thing I do know, Vermont Living took on a whole new meaning that cold, dark, muddy night when I and my children became one with our environment. Nonetheless, we wouldn’t trade the joys of Vermont Living for anything!