Dining – Reviews – Michael’s on the Hill

Michael’s On The Hill

For more than two decades Michael’s on the Hill has been satisfying dinners by serving sensational entrees and one-of-a-kind dishes that will absolutely amaze. Visit Vermont for a unique dining experience. Ask us about VT Restaurants or share dining experiences. To feature your outstanding restaurant, contact us.

Michael's on the Hill, 4182 Rt. 100 North, Waterbury-Stowe Road, Waterbury Center, VT  | 802-244-7476
Enjoy the "ultimate Vermont dining experience" from within our Circa 1920 farmhouse. Allow us to provide you with locally driven European cuisine and the highest level of quality and service in a relaxed, welcoming atmosphere. The restaurant has been awarded with the Wine Spectator Award of Excellence, the Sante Magazine Sustainable Restaurant Award and is a Certified Green  Restaurant. Vermont's First- Chef of the Year, Breathtaking Green Mountain Views, Private Event Facilities, Fireplace, AC.
Visit Website 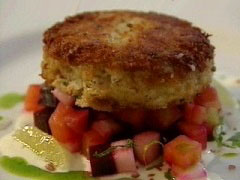 Chef Kloeti was honored because of his contributions within the hospitality industry and the community, and his noteworthy cooking expertise.

He received his award from Governor Douglas at a gala event at the Basin Harbor Club, and will be a guest chef at the New England Food Service and Lodging Expo in Boston this April.

Born, raised and trained in Switzerland, Chef Kloeti moved to the United States 15 years ago to enrich his classical French cooking background with other cultures. 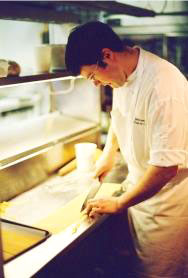 As a result, he worked in a variety of settings ranging from New York City’s 4-star Lespinasse to upcountry comfort food at the Lodge at Koele in Lanaii, Hawaii. The invitation to run the St. Regis Hotel as Chef de Cuisine brought him back to Manhattan, and his decision to raise his family in Vermont led him to the eventual opening of Michael’s on the Hill Restaurant.

The restaurant offers innovative European cuisine with the perfect blend of American Regional influence. As members of the Vermont Fresh Network, The Slow Food Movement and Local First Vermont, the use of local, organic products are of premier importance. He passionately supports the movement towards sustainable agriculture in Vermont.

Through a variety of venues, Michael does his best to educate the public on the importance of eating locally produced products, and is particularly passionate about teaching children and their parents of the personal and global benefits.

Michael has been a featured chef on various television shows, and international magazines and has been invited as a guest chef at Disney World’s International Food and Wine Festival for the past four years. He will be returning this November to represent the State of Vermont. Chef Michael lives in Stowe with his wife/partner, Laura, and his two children, Alex and Eric.