This U.S. historic site is owned, operated and maintained by the State of Vermont.  Between Mid May and mid October you can visit these splendid historic sites daily from 9:30 am to 5:30 pm 7 days a week.  During the winter months special exhibits may be viewed at The Aldrich house.  Every 4th of July the site hosts a special celebration.

Located on Route 100A between Woodstock and Rutland Vermont, the rural Vermont town of Plymouth Notch, the birthplace and boyhood home of Calvin Coolidge, has remained unchanged since the turn of the century. The homes and community buildings present at that time have been preserved as have many of their original furnishings.

The Visitors center was built by the State of Vermont in 1972, the centennial of President Coolidge’s birth.  There you can find a museum, gift shop and other exhibits.  The Wilder Barn has an extensive collection of framing implements and dates back to 1875.  The Wilder House was originally a tavern built around 1830 and was the childhood home of President Coolidge’s mother, Victoria Josephine Moor.

The Coolidge Homestead was the location where President Coolidge took the presidential oath of office after the death of President Harding in 1923. Recently a signed copy of the inaugural oath of office was purchased by a California History professor for $15,000. He died there in 1933 and is buried in the town cemetery beside six generations of Coolidges.  Many other fine historic buildings remain in Plymouth Notch, Vermont, each with its own special history and ambiance. Calvin Coolidge attended the Black River Academy in Ludlow Vermont. He called “Red” or “Cal” and was known for his dry wit. His Presidential campaign slogan was “Keep Cool with Coolidge”. Calvin Coolidge was fond of the following poem, which hung on the living room wall of his home. 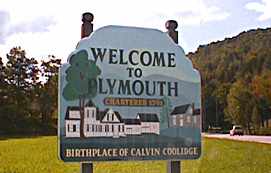 Visit Vermont Towns
Local Historical Societies often have a lot of information especially about that particular region.
Find out what movies were Filmed in Vermont