Completed in 1891, the Bennington Battle Monument stands 306 feet, 4 1/2 inches tall. The cornerstone was laid in 1887 and it was constructed of Sandy Hill Dolomite from present day Hudson Falls, NY. From the observatory level, reached by elevator, one can see Vermont, New York, and Massachusetts. The monolith is the tallest structure in the State of Vermont. Ask us about Vermont historic sites or share your Vermont historical information and comments. To feature your business, contact us. 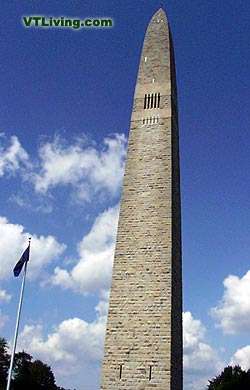 The monument was built to commemorate the Revolutionary War Battle of Bennington. It was here in 1777 that General John Stark successfully defeated two detachments of General Burgoyne’s invading British army.

As a result of engagements at Fort Ticonderoga and Hubbardton, the British were in desperate need of supplies. With reports of the arsenal depot stored at the present day Monument site, Burgoyne’s unit headed for Bennington. General Stark, with the aid of Seth Warner and the Green Mountain Boys, successfully sent the British fleeing. It is said that Stark’s defense and capture of British supplies led to Burgoyne’s surrender at Stillwater after the Battle of Saratoga.

Directions:
From Route 7, follow signs through Bennington to the Monument located on Monument Circle at the top of Monument Avenue. 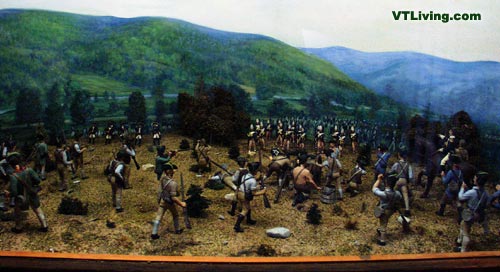 A painting depicting the Battle at Bennington, Vermont